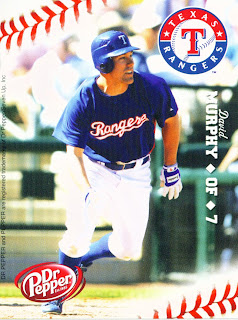 The lone run came courtesy of a solo home run by David Murphy. Murphy, show here on his 2008 Dr. Pepper card, is 1-for-3 tonight. Maybe he'll be able to unload another dinger and get the Rangers in the game against the Angels.
Posted by Spiff at 9:02 PM

The Rangers' offensive peaks and valleys seem to mirror those of the Phillies this year. Very, very frustrating. Here's hoping for a Sox collapse and a Rangers winning streak.

Thanks Moe. There are several others from the set scattered in other posts.