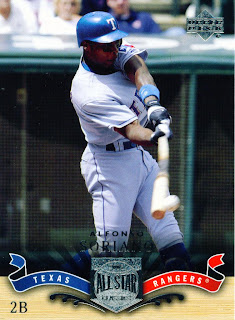 On the verge of starting what is possibly the biggest home-stand of the season the Rangers are experiencing a rain delay. So far the game has been delayed for about an hour and forty-five minutes.

Somewhat frustrating but not nearly so as Alfonso Soriano's year has been. After landing a huge contract with the Cubbies the former Rangers' second baseman has struggled. Today the Cubs announced more bad news. Soriano, seen here on card number 3 of the 2005 Upper Deck All-Star Classics set, is most likely out for the season. Apparently his left knee will need surgery. Soriano will be getting a second opinion but a return to the field this year is not foreseen.

At least Chicago is already eleven games behind St. Louis and eight out in the wildcard so the news won't sink the season.
Posted by Spiff at 8:36 PM