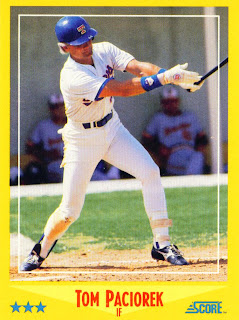 No, Tom Paciorek isn't particularly uninspiring, the way the Rangers ended their season in contention was. The 5-2 loss last night allowed Boston to clinch a playoff spot while losing. Not real exciting. Much like the 1988 Score set. Just not much there. Even on card number 531, Tom Paciorek. Leaves me searching for a meaningful post and coming up empty.

In last night's loss Marlon Byrd left the game early with a hip injury. He is listed as day-to-day right now but with only five games left he is likely to join Josh Hamilton on the bench. At least it's September and the expanded rosters make it easier to cover something like that.
Posted by Spiff at 5:13 PM