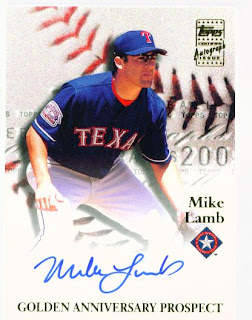 Today is an off day in the Rangers' schedule. The team isn't traveling though so perhaps they can get rested and recharged. At any rate it is a break from the bloodletting that the season has become as of late.

With no action I decided to post this card 2000 Topps Golden Anniversary Prospect card of Mike Lamb. The card is number GAA-ML in the set and features Mike's certified autograph.

Nice looking card of a player the Rangers just didn't have room for. Mike was a third baseman for Texas from 2000-2003. That was about the time that Hank Blalock was breaking onto the scene. Lamb ended up being dealt to the Yankess to free up the hot corner. Guess there are times that you just gotta make a decision on who goes and who stays.
Posted by Spiff at 8:04 PM