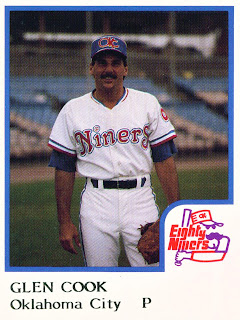 So the Rangers get swept by the A's and squander an awesome chance to move up in one of their races. Jarrod Saltalamacchia is done for the rest of the year as he is scheduled for surgery on Monday to correct his Thoracic Outlet Syndrome. Josh Hamilton and Michael Young will be out a few more days. When it rains, it pours.

At least Scott Feldman and Glen Cook managed to brighten up the past week a little. Both of them signed and returned cards that I had sent to them with requests to sign. Feldman signed one of two while Cook signed both.

Interestingly enough, the cards I sent Glen Cook were from the 1986 Topps set. Today's card is also of Glen and is from the 1986 ProCards Eighty Niners team set. Glen appeared in nine games for Texas in 1985. That was enough to get him a Topps card in a Major League uniform. He appeared in 18 games for OKC. That was enough to get him this card. Kind of a parallel universe thing going there.
Posted by Spiff at 9:48 PM