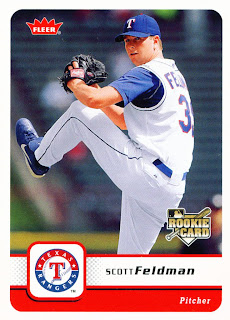 Texas won a matinee game today in Cleveland 10-0 as they scored big in the first and ninth innings. Esteban German, Ivan Rodriguez, and Elvis Andrus were all key contributors to the Texas barrage.

Scott Feldman was undoubtedly the day's star though. Feldman, seen here on card number 292 of the 2006 Fleer set, went seven scoreless innings to get the win. It is Scooter's 12th road win this season and takes his season record to 16-4. The outing also lowers his ERA to 3.46 on the season. Not bad for the guy who was supposed to be the third or fourth starter in the rotation coming out of Spring Training. I don't like to presume but if the team is still playing after October 4th I would like Feldman as the opening starter.

After an off day tomorrow the guys will be back in Arlington to host the Mariners. Three games against Seattle and then three each against the A's and Angels will be the homestand. Got to win a lot of those games, especially against the Angels.
Posted by Spiff at 4:21 PM

We just have to keep on winning - that's pretty much all there is to it.