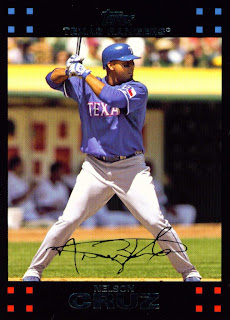 Wow! Seems like a lot has happened since I last posted. Nice to have the computer room done and the scanner back up and running. Ok, so what all did I miss?

Well, the Rangers' win streak ran to 12 before they lost a game to the Angels. Meanwhile Nolan Ryan entered and left the hospital with a flare-up of his heart problems. The day before yesterday C.J. Wilson lost a game 1-0 on an unearned run in a great pitcher's duel. Then came last night's 12-2 win against the Blue Jays in Arlington.

The Rangers seemed to enjoy being home. None more than Nelson Cruz, shown here on card number 564 of the 2007 Topps Redbacks set. Nellie drove in eight runs while going 4-for-4. His hits included a double and a home run. Michael Young was equally hot as he went 4-for-4 as well. Mike Napoli and Adrian Beltre did well also. Starting pitcher Colby Lewis went 6.2 innings and struck out five on the way to getting the win. Probably one reason he didn't go deeper in the game was the bullpen's need for work with the recent pitching performances by the starting rotation.

On a down note, Adrian Beltre left the game in the fifth inning after running from first to third. Today the Rangers placed him on the 15-day Disabled List for a strain of his left hamstring. Bummer. Chris Davis is up to replace him. Will be interesting to see if Chris can take advantage of his rapidly diminishing chance to stick with Texas.

Ok, think I'm all caught up now. Good to be back. Looking forward to getting back into the posting routine.
Posted by Spiff at 6:31 PM