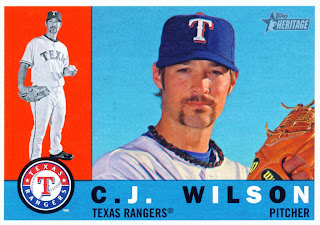 C.J. Wilson, shown here on card number 532 of the 2009 Topps Heritage set, started in last night's makeup game against the Oakland A's. The game was a makeup for an earlier season game that got rained out. At the time of the rainout the Rangers were leading the A's 7-0 behind Matt Harrison.

Gio Gonzalez started both games for the A's and performed about the same in both. In the rainout he gave up a grand slam to Mitch Moreland. In last nights' game the slam was surrendered to Mike Napoli.

By the end of the first Texas led Oakland 5-0 in route to an 8-5 win. C.J. went seven and gave up four. In addition to Napoli, Ian Kinsler and Adrian Beltre also hit home runs. Theirs were solo shots. Neftali Feliz got into a little trouble in the ninth and gave up a run but Tommy Hunter turned in a scoreless eighth.

All in all a good night and a nice win. Keeps the team in sole possession of first place for one more day.
Posted by Spiff at 5:56 PM