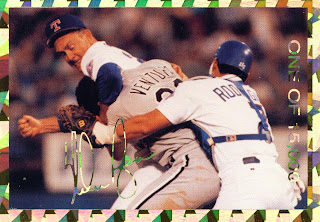 Number two in T.R. Sullivan's list of 50 strange occurrences is the moment depicted on this unlicensed card from 1993. As a disclaimer, this is a controversial tale for some White Sox fans.

On August 4, 1993 the Rangers were hosting the White Sox. Nolan Ryan was on the mound. By this point in his career he was considered a sure-fire Hall of Famer and the crowds were packing in to see him.

In the third inning Robin Ventura stepped to the plate. Ventura was one of the hot young players on the ChiSox at the time. I can remember hearing about him and Frank Thomas in terms similar to Babe Ruth and Lou Gehrig.

During the at-bat Ryan hit Ventura with an inside pitch. Nolan would later claim that the beaning was not intentional and that he was just trying to go inside. Since Nolan didn't really have a reputation as a headhunter one can probably take him at his word. Robin didn't though, not then and not later. He charged the mound. As he did catcher Ivan Rodriguez leapt up and ran after him.

Ventura reached Ryan before Rodriguez reached him. Ryan stepped back as Ventura lunged and then caught him in a headlock. As Robin struggled Nolan delivered five or six (depending on who's counting) punches to his face. Other players from both teams then swarmed the mound.

In the aftermath Ventura and Sox manager Gene Lamont were ejected. Apparently the umpires did not think that the beaning was intentional because they left Ryan in the game. He proceeded to beat Chicago 5-2.

In the aftermath Ryan told the media that he didn't believe in fights. However, he had been charged by Dave Winfield in 1980 and didn't enjoy the experience. After that he had decided to defend himself vigorously should it happen again. Thirteen years later it did and he did.

Ventura claimed that Ryan was throwing at him in retaliation for Alex Fernandez hitting Juan Gonzalez earlier in the game. He claimed that he went to the mound to defend himself and that all Nolan did was give him "some noogies." He also claimed that the only reason he was tossed and Ryan wasn't was because the officials were in awe of Ryan. For years after that comment I figured that Ventura was a sorehead. Recently I have read several things that changed my opinion of him in that regard. Apparently he is a really down to earth and classy guy. I would surmise that the stress of the situation just got to him.

Rafael Palmeiro summed up the incident pretty well when he said, "I never thought I'd ever see anyone charge the mound against Nolan Ryan. I bet we won't see it again."
Posted by Spiff at 8:10 PM

That is still one of the oddest things I've seen while watching a game. :-)