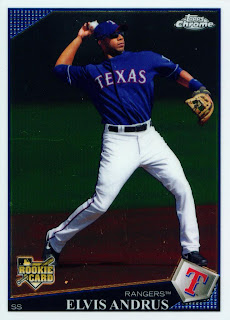 The Rangers completed their sweep of the Orioles last night. The three game series was an offensive eruption for Texas and last night was no exception as they downed the O's 13-5. The win gives them sole possession of first place again.

Alexi Ogando stayed in his early season form as he went seven innings and gave up just three runs to grab the win. Darren O'Day flashed some of his 2010 self as he went a scoreless ninth to seal the deal.

Michael Young, Adrian Beltre, and Endy Chavez all had a great night at the plate. Ian Kinsler, and Mitch Moreland also had good times at the dish.

By far and away the best night at the plate belonged to Elvis Andrus, pictured here on card number 194 of the 2009 Topps Chrome set. Elvis had been scuffling badly heading into last night. In fact, he was 1-for-19 on the homestand prior to the game. Lots of folks were hoping that Andrus could break out of the slump and break out he did.

Elvis went 4-for-4 with a walk. Two of those hits were doubles. Andrus scored three times himself and knocked in a run as well. Good stuff.

Nice to see the sweep, the team back in first, and the return of Elvis' bat. Now to keep the ball rolling against the A's going into the All-Star break.
Posted by Spiff at 8:07 PM