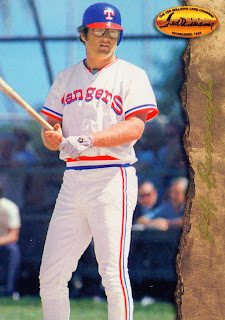 Sorry about no post yesterday. Had family in and Spiff Jr. had a ballgame. Too much going on I guess. Also missed most of yesterday's comeback win over the Orioles so I will pass on commenting on that other than to say that it's nice to see the guys winning again.

Along with his top 50 lists on decisions and seasons T.R. Sullivan also complied one on strange occurrences and odd moments in the Rangers' history. Along with the series on the first two lists I would like to do one on this list as well.

Number one on T.R.'s bizarre moments list is the game the Rangers played in Cleveland on June 4, 1974. In 1974 the Rangers were making some contention noise for the first time in their history. The Indians were mired in a long stretch of mediocrity. With attendance down and the unknown Texas team coming to town something had to be done to draw the fans. The result? Ten cent beer night.

The basic idea was this: for about fifty cents a guy could sit in the bleachers. For ten cents he could get a beer - no limit on the number. All told 25,134 folks came to the game that night (compared to the normal 8,000). The crowd drank approximately 65,000 beers. In fact, the Indians couldn't keep the booze flowing quick enough and ended up giving refills straight from the trucks. What could possibly go wrong? Plenty.

Fireworks were already going off pre-game and the assembled crowd booed Texas manager Billy Martin when he delivered the lineup card to the home plate umpire. In the second inning a woman jumped out of the stands, exposed her breasts, and tried to kiss the home plate umpire. In the fourth Mike Hargrove homered. As he rounded the bases a naked man ran onto the field and slid into second base. In the fifth inning a father and son jumped onto the field and mooned the Rangers. By the seventh inning the bullpens had been evacuated due to the rain of fireworks, trash, and beer.

By the bottom of the ninth things were completely out of control. The outfield wall was being torn down in places and the war drums were literally beating. Security was either ineffective or overrun.

Cleveland was behind 5-3 but mounted a rally to tie the game. To celebrate a fan ran into right field and tried to steal Jeff Burroughs' cap. Burroughs, shown here on card number 86 of the 1994 Ted Williams set, got into a scuffle with the fan. More drunks poured onto the field and surrounded Burroughs. Billy Martin led a charge of Rangers armed with bats to rescue Burroughs. As the crowd closed in on them the Indians charged out of their dugout and into the fray. Several in the crowd and several players were injured. Cleveland player Tom Hilgendorf got hit in the head by a folding chair. Knives and chains were seen in the mob.

With the bases all stolen and a hunting knife landing not too far from him, umpiring crew chief Nestor Chylak called the game as a forfeit in favor of Texas. He later said he had never seen such behavior outside a zoo. Shortly after the game was called the riot squad arrived and cleared the stadium. Major League baseball then cancelled all further ten cent beer nights for the season.
Posted by Spiff at 6:18 PM