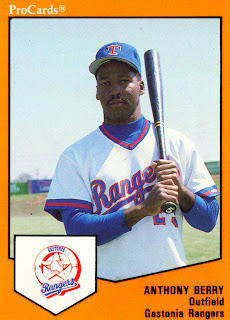 Another pre-scheduled post. Hopefully Mrs. Spiff will be done and the room and computer back to normal by tomorrow.

Seeing as I have never been good at looking into the future, I thought that it might be better to go back in time and revisit the 1989 ProCards set. Today we see Anthony Berry on card number 1009.

Berry was the 36th selection of the 1988 draft. That year he played with the Rookie League GCL Rangers in Sarasota. He got 270 plate appearances and batted .250 with a .333 on-base percentage.

Those numbers were good enough for Anthony to get moved up to Single A. In 1989 he would appear in 43 games for the Gastonia Rangers. He went to the plate 141 times and batted .169. His on-base percentage was .298. Berry did manage to improve his fielding percentage but that was of little matter in an organization where outfielders were expected to hit well.

I'm not sure who made the decision that 1989 would be Anthony's last season in pro ball but it was. Looking at the numbers it seems pretty clear that his offensive struggles played a big role in ending his career. Having a hard time at the plate in Single A is not a good sign. Apparently it was an exit sign for Anthony Berry.
Posted by Spiff at 12:08 AM