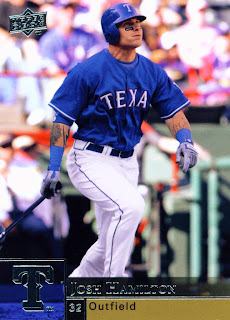 As C.J. Wilson said yesterday, "Bummer." I think that about sums up the All-Star game. Probably about sums up Scott Feldman's thoughts as he gets put on waivers today. Can't see him getting claimed or declining a minor league assignment though.

Using the break from play today for the second installment in the Top 50 Best Seasons list that T.R. Sullivan compiled earlier this year. Number two on the list is Josh Hamilton's 2010 campaign.

Most everyone who follows baseball knows about Josh's 2010 season - memorable to say the least. In spite of missing a month of the season Hamilton, shown here on card number 902 of the 2009 Upper Deck set, managed to log a purely awesome year.

In 571 plate appearances Hamilton posted a league-leading .359 batting average along with a .411 on-base percentage (second in the league). His 40 doubles, three triples, and 32 home runs (fifth in the league) combined for a league-leading .633 slugging percentage. That all translated into an even 100 RBI. Hamilton also stole eight bases while getting caught just once. Not a speed merchant by any stretch but he stole often enough that opposing pitchers did have to keep an eye on him.

In addition to being a wrecking ball on opposing pitching staffs he also did his share to throw a kink in the other teams' offense. In 1034.2 innings in left and center field Josh flubbed just four times. His .985 fielding percentage was just one point below the league average .986.

In recognition of his performance Hamilton took home the hardware. In addition to his American League Champions ring he also won a silver slugger award, the American League MVP, and was named to the All-Star team. Truly a top performance in a Rangers season that was long awaited.
Posted by Spiff at 8:04 PM