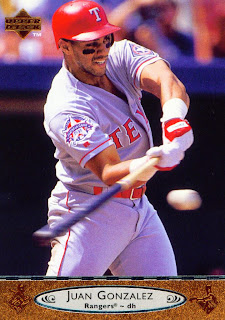 Another loss last night. Seems the Rangers are determined to make this season a dogfight with the Angels.

Time to move on to the third season listed in T.R. Sullivan's fifty best Ranger seasons list. Today is Juan Gonzalez, shown here on card number 206 of the 1996 Upper Deck set, and his 1996 season.

1996 was the year the Rangers finally broke their post-season drought. The team is perhaps the second most popular team in Rangers history. Both are in large part thanks to Juan Gonzalez.

Juan's defense in 1996 was just a few ticks above the league average. He never was a Gold Glove winner so that was about the norm for him. What made the season stand out was his offense. Always a threat at the plate, he seemed to step it up a bit that year.

In 592 plate appearances he posted a .314 batting average and a .368 on-base percentage. He struck out 82 times while walking 45 times. As you might expect, that indicated some power. Gonzo's 47 home runs were a career high. His two triples and 33 doubles were not but were good enough for the second most doubles on the team. He also knocked in 144 RBI. It's safe to say that the Rangers would likely have not won the division if not for Gonzalez.

In the post-season Juan continued to hammer away. Even though the Yankees eliminated the Rangers in four games he refused to go quietly. In 19 plate appearances his batting average was an astounding .438 and his on-base percentage tallied to .526. He walked four times - amazingly only once intentionally. He homered five times while grabbing nine RBI.

In recognition of his performance Gonzalez won the American League MVP and a Silver Slugger award.
Posted by Spiff at 1:34 PM