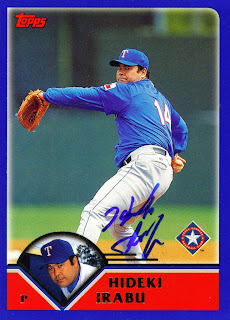 Former Rangers pitcher Hideki Irabu was found dead on Wednesday in his California home. Law enforcement is saying that the death is being investigated as a suicide.

Irabu never really lived up to the hype he brought with him from Japan to the Yankees. He also didn't deliver like Texas and Montreal were hoping he would.

That makes his apparent course of action no less tragic. Life is a precious gift. As such it is inexplicably saddening and infuriating when one who has been given that gift rejects it.

Hopefully Mr. Irabu's wife and children have a support system to help them through this difficult time.
Posted by Spiff at 3:31 PM