Finishing the first half strong. 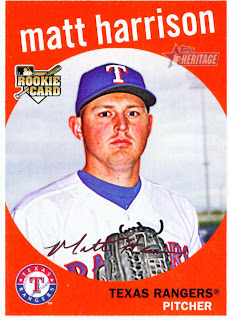 So the Rangers finished the first half of the season strong with a seven game winning streak. The Angels have been doing well also. End result is that Texas is still on top of the division but by only one game.

The final win before the All-Star break came thanks to Matt Harrison's arm. Matt, shown here on card number 525 of the 2008 Topps Heritage set, went 7.2 shutout innings against the A's on Sunday afternoon. Adrian Beltre launched a two run home run in the sixth to give Harrison his seventh win of the season.

So far so good for Texas this season. No major injuries and the starting rotation seems to be pretty solid. Darren O'Day is back. So is Tommy Hunter. Scott Feldman will be coming soon and has been doing well in rehab. The offense seems to be coming together as well.

The two areas that it would be good to see some improvement would be the bullpen and defense. Both are rather streaky, things go well for awhile and then start to hit a rough patch. A lights out reliever or two would be very nice going down the stretch. Going to be a dogfight with the Angels all the way I think so every game will count. It will be interesting to see how things shake out.
Posted by Spiff at 8:55 PM

Hey! I see that you just posted about Matt Harrison. I have a 2011 Topps 60 Harrison auto for trade. Interested? Please send me an email: michaelspiegel83@yahoo.com

check out my blog for my wants.
Nomo's Sushi Platter