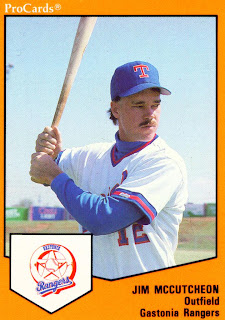 So the Rangers were shutout against the Blue Jays last night. Only the fifth time they haven't scored in a game this season. At least they won the series 2-1.

With no real standout performances last night, I thought this might be a good time to take another gander at the 1989 ProCards set. Jim McCutchen appears on card number 1011 of the set.

Finding Jim's records on Baseball-reference was a pretty daunting task. It would have been easier if ProCards had spelled his name correctly. They didn't though and it took me a little while before I tried alternate spellings and got the information.

According to the back of McCutchen's card, he was the 18th selection in the 1986 draft. Three seasons later he was only up to Single A. Not a good sign. By this point it may be safely inferred that Jim's career was in perceptible danger. He needed to get moving and fast. Outfielders in the Rangers system in the late '80's and early '90's were expendable if they didn't deliver.

In 1989 McCutchen would appear in 119 games for Gastonia and make 433 plate appearances. His batting average would tally to a pedestrian .216. His on-base percentage was almost a hundred points higher at .310. That was in part due to the 50 walks he worked. With 34 more strikeouts than walks one might think that Jim was a power hitter. Wrong. for the season he would hit just 15 doubles, one triple, and one home run.

Not pretty numbers. Not enough to get promoted. Not even enough to stick as it turned out. I'm not able to find the details but 1989 was McCutchen's last season in the Texas farm system. By 1990 he was with Milwaukee and had been demoted to Rookie ball. Apparently the Brewers tried to convert him to a pitcher - he would appear as such in 13 games in 1990.

After missing the entire 1991 season McCutchen would pitch for the independent Salinas Spurs in the California League in 1992. The Astros would take a chance on him for the 1993 season. He played Single A ball for them. It would seem though that Jim's luck was no better pitching the ball than it was hitting it. 1993 would be his last season in pro ball.
Posted by Spiff at 8:42 PM