Back with a vengence. 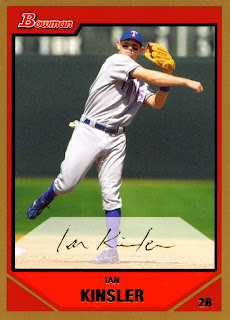 Apparently the Rangers took exception to being shutout on Sunday night. Last night they unleashed the dogs of war against the Twins to score a 20-5 win. In the process they hammered a MLB season-high 27 hits. Nice to see the offense rebound.

Ian Kinsler, shown here on card number 18 of the 2007 Bowman Gold set, went 4-for-6 in the game. Nelson Cruz did as well and Mike Napoli went 4-for-5. Kinsler bumped in four RBI though and that was more than anyone else in the lineup so he gets today's card.

In addition to Kinsler, Cruz, and Napoli almost everyone else got in on the action, most with at least two hits. Even Omar Quintanilla knocked a triple in his lone plate appearance. David Murphy was a late inning replacement and went 0-for-2. Chris Davis' struggles continued as he went 0-for-6 with two strikeouts. Murph, Davis, and Napoli were the only guys without an RBI in the game. Not sure how Nap managed that with his production at the plate.

In the midst of the artillery going off Derek Holland went six innings while giving up just one run and that was unearned. Dutch also picked up four strikeouts in route to what is likely the easiest win he will ever get at the Major League level.
Posted by Spiff at 9:52 PM