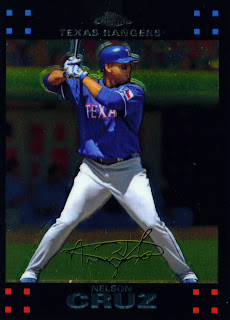 Yesterday was Nelson Cruz's birthday. To mark the occasion he hammered the Marlins in Arlington. Nellie, shown here on card number 241 of the 2007 Topps Chrome set, went 2-for-5 last night. That's not particularly noteworthy but Cruz made the most of his hits with a home run and a triple. Nellie scored twice and knocked in six RBI.

Starting pitcher Alexi Ogando took advantage of the offensive production. Alexi went six scoreless before giving up a couple of runs in the seventh. Nice to see the Ogando of the early part of the season.

In addition to the two runs surrendered by Ogando in the seventh, Florida also pushed three across in the ninth. Final: 15-5 Texas. Happy birthday Nelson!
Posted by Spiff at 7:15 PM