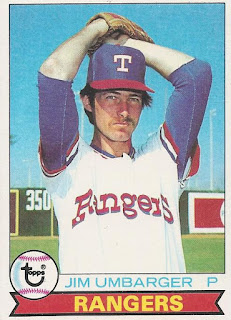 Well, the next week or so is going to be real hectic. I know, just in time for the season to come down to the wire with the Rangers still in contention. Nevertheless, pre-scheduled posts will be the order of the day until things slow down a bit. Without further delay, on to 1979.

After an unusual 1977 season, Jim Umbarger won a spot in the Texas bullpen in 1978 following a great Spring Training where he posted a 1.93 ERA. Umbarger, shown here on card 518 of the 1979 Topps set, was unable to replicate that spring success in 1979 and didn't make the Opening Day roster. Instead he headed off to the Triple A Tucson Toros.

As an aside, this card has always interested me. It appears both of Umbarger's sleeves are torn out along the seams, the left more so than the right. I used to wonder why the Rangers couldn't afford to repair Jim's jersey. Seems to me now that the damage might not be accidental. Look at the gap on the left sleeve. Perhaps Umbarger tore out the sleeve to keep it from binding up on him when he went into his windup. Anyway, back to his 1979 season.

Apparently the Rangers decided to move Jim back to his old role of starter instead of sticking with the 1978 reliever gig. 20 of Umbarger's 26 appearances with the Toros were starts. He pitched 133 innings and got roughed up pretty soundly with a 5.75 ERA and an 1.767 WHIP. Looks like part of the problem was Jim's control, he walked 69 batters while whiffing just 73. Not surprisingly, he ended the season with a 6-10 record.

Needless to say, the numbers Umbarger put up in Triple A were not likely to get him recalled to the Big Show. He would split 1980 between Double and Triple A but again not get the call that season either. The Rangers released him prior to the 1981 season. Baltimore picked him up and assigned him to Triple A Rochester. They let him go after that season. Jim was back in 1983 and bounced between Double and Triple A for the White Sox and Pirates. Still no call-up. That was the end of the line. Umbarger hung up his spikes after the 1983 season.
Posted by Spiff at 11:11 AM