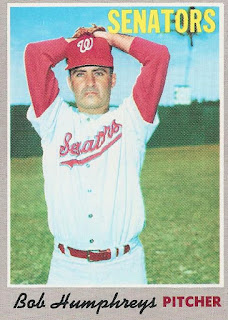 Bob Humphreys, shown here on card 538 of the 1970 Topps set, seemed to have carved out a spot for himself in the Senators bullpen since joining the team prior to the 1966 season. 1969 had been a decent year for Humphreys, even if there were a few warning signs to be aware of. 1970 promised to be a year for Bob to move his career one way or the other. It turned out to be one frustration after another.

Prior to the 1970 season, Humphreys did some workouts at the University of Maryland. One day the baseball coach there asked him to demonstrate a breaking ball for some of his pitchers. Bob obliged but injured his right elbow in the process. It was a second injury to the elbow and would take time to recover from in the pre-Tommy John surgery world.

Humphreys still reported for Spring Training in an effort to work through the injury. In the process he tore a muscle in his right shoulder. That earned him a trip to the Disabled List and a plane ticket to Triple A Denver for a rehab stint. After just eight innings over three games with the Denver Bears, Bob was back in the Washington bullpen.

Appearing in five games and pitching 6.2 innings for the Senators, Humphreys posted a 1.35 ERA, a significant drop from the previous season. On the surface things were looking good. However, Bob's WHIP climbed to 1.950 as he walked nine opposing batters while striking out just six. Those were indicators of impending trouble.

Apparently taking heed of the warning signs, Washington released Humphreys on June 13, 1970. Bob was surprised by the release but wasn't out of work for long. On June 15, 1970 the Milwaukee Brewers signed him. He would split the remainder of the season between the Majors and Triple A, using his knuckleball to take the stress off his elbow.

The Brew Crew cut Humphreys during Spring Training in 1971. He spent part of that season with their Triple A affiliate but couldn't put it all back together. Struggling and frustrated with his performance, he asked for his release and hung up the spikes on his playing career.
Posted by Spiff at 12:08 PM