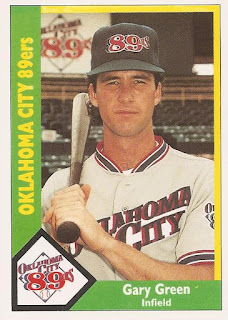 By the time the Rangers drafted Gary Green in the 1989 Minor League draft, he already had Major League experience. Green, shown here on card 163 of the 1990 CMC set, played in a total of 28 games in 1986 and 1989 with the San Diego Padres. Texas apparently thought he would be a good insurance policy for shortstop Jeff Huson.

Green ended up splitting the season between Triple A Oklahoma City and the big time in Arlington. With both teams he played only at shortstop.

Gary appeared in 55 games for the 89ers and got 193 plate appearances. He put up middle infielder type numbers with a .234 batting average and a .319 on-base percentage. He scored 19 runs and notched 25 RBI. He hit 11 doubles and four home runs. He did strike out 43 times while walking just 22 times - a disturbing ratio for a hitter with little power.

In the field for OKC, Green committed ten errors for a .961 fielding percentage.

Once in Texas, Gary appeared in 62 games and made 99 plate appearances. He continued to struggle at the plate as he put up a .216 batting average and a .263 on-base percentage. He scored 10 times and bumped in eight RBI but his power dried up almost entirely. He hit just three doubles to account for all his extra base hits. Green whiffed 18 times while walking just six to make his strikeout to walk ratio even more lopsided.

Shortstop was a crowded position for Texas in 1990 with Jeff Huson, Jeff Kunkel, and Gary Green all contending for playing time. Unfortunately for Green, he hadn't done anything to make himself stand out from the other two. He needed to come to Spring Training in 1991 and blow the doors off if he wanted to play in Arlington again for any length of time.
Posted by Spiff at 9:51 AM