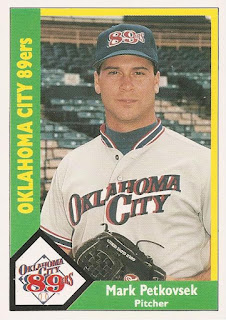 The Rangers drafted pitcher Mark Petkovsek in the first round of the June, 1987 draft. He started his pro career the same year with the Gulf Coast Rangers in Rookie ball.

Petkovsek, shown here on card 155 of the 1990 CMC set, finished the 1987 season with the Single A Charlotte Rangers. He would spend all of 1988 there as well. In 1989 the Rangers jumped Mark to Double A Tulsa. By the end of the season he was with Triple A Oklahoma City.

Based on Petkovsek's rapid rise, you might think he was a fire-balling lights out type of pitcher. That would be a misconception. In his first three seasons Mark had seen his ERA dip below three just once, during his 1988 season in Charlotte. His time in Tulsa in 1989 was the only stretch he had where he posted a winning record. Just why Texas kept moving him up is somewhat of a mystery to me.

Petkovsek would spend the entire 1990 season at Triple A with the Oklahoma City 89ers. He appeared in 28 games for them, all starts. Over the 151 innings Mark pitched, he posted a 5.25 ERA and a 1.517 WHIP. That ERA looks a bit rougher when you consider one he did toss a complete game shutout during the season. On the other hand, that indicated he had some potential to be very good. Petkovsek could strike out opposing batters - he did it 81 times in 1990. Of course, he also issued 42 walks as well. Mark saw his record dip back below .500 as he ended the season at 7-14.

None of Mark Petkovsek's 1990 numbers were anything to write home about, even at the beginning of the steroid era. Texas was not pitching-rich but Petkovsek needed to see his ERA drop some if he wanted to make that last step from Triple A to the Majors. Being a first round pick, he probably had a few more chances left but sooner or later Texas was going to decide he wasn't working out and either trade or cut him.
Posted by Spiff at 1:02 PM