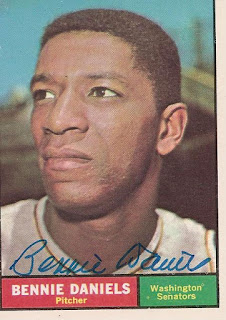 Had a couple of more autograph requests come back this past week. Both were former Washington Senators. Joe Hicks and Bennie Daniels both signed and returned two cards.

One of the cards Mr. Daniels signed and sent back was this mis-cut 1961 Topps card. It and the 1961 Topps card Mr. Hicks signed are now the oldest autographed cards I have in my collection. I sent my request to Mr. Daniels on August 25th and he got it back to me on September 4th. Pretty fast turnaround. Thanks much Mr. Daniels and Mr. Hicks.

I really enjoyed getting the returns from the Senators players. Great to be able to fill in some from the franchise before it moved to Texas. Speaking of filling in, I really need to fill in some more holes in my Senators team sets and current Rangers team sets. Looks like I am starting to run out of subject matter for Senators Saturdays and posts on the current Rangers run for the post-season. It would seem a trip to Duane's Sportscards is in order. Spiff Jr has been hinting that he would like a return trip there as well. I think we are going to try to shoehorn it in between other family activities this coming Saturday. Love to say hey to anyone else who might be there as well.
Posted by Spiff at 10:05 AM