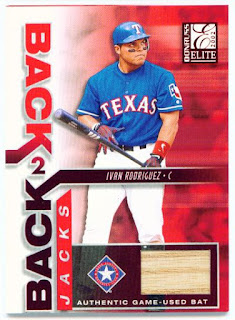 Hall of Famer Yogi Berra passed away this past Tuesday at the age of 90. Yes, Berra was a Yankee but, he was still a good guy. As a kid I remember being fascinated by his and Satchel Paige's remarks. He played a role in hooking me on baseball. He's probably also the reason I latched on to Pudge Rodriguez, shown here on card BB-11 of the 2002 Donruss Elite Back 2 Back Jacks set.

Always displaying a positive attitude, Yogi was there for some big moments. D-Day, Don Larson's perfect game, ten World Series championships. He played alongside Joe DiMaggio, Mickey Mantle, Whitey Ford, Phil Rizzuto, and many other Yankee greats. In his first year of managing, he took the Yankees to the World Series. In typical Yankee fashion, they fired him immediately afterwords. He still came back years later and endured another firing before writing the team out of his appointment book. It took a lot to get to Berra though and he eventually forgave the team and returned to the fold.

The Yankees' loss was the Mets and Astros gain. They latched on to Yogi as if he had been part of their clubs. He led the Mets to an improbable World Series title. They didn't fire him immediately afterwords.

The world is a poorer place without Yogi Berra and we will never see his like again.
Posted by Spiff at 11:04 AM