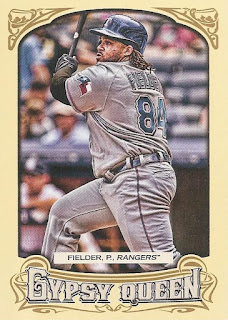 Cole Hamels started against the Astros last night as the Lone Star showdown kicked off. He looked a bit rough, giving up a home run in the first inning as Houston took the lead. Cole was able to settle down though and ended up making it through seven, giving up a total of three Astros runs. The bullpen took over in the eighth and kept Houston off the board for the final two frames.

While the hurlers were doing their stuff, the Texas offense managed one run in the second on an Rougned Odor double. A two run shot by Mitch Moreland in the sixth helped the Rangers keep pace. That left it at three all headed into the bottom of the eighth. Prince Fielder, shown here on card 172 of the 2014 Gypsy Queen set, settled the issue with a two run long ball to put the Rangers up 5-3. That held up through the top of the ninth to give Texas the win.

With the victory last night the Rangers pull up to half a game back in the division race. They also kept one game ahead of the Twins for the second wild card and three games back from the Yankees for the first wild card and both of those teams also won. Things are tight and getting down to the wire.

Going into tonight's game, Texas is sending Derek Holland to the mound in an attempt to knock Houston out of first place. Dutch is carrying a 3-2 record and a 3.13 ERA since his return from the disabled list. It would be nice to see him come up big against Houston. If the Rangers can survive the pressure cooker they are in right now then a post season series should be nothing new.
Posted by Spiff at 10:48 AM