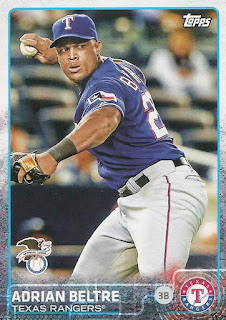 Texas finished up the first part of the current home stand yesterday by taking the rubber match from the A's.

Chi-Chi Gonzalez got the spot start as Texas gave their whole rotation an extra day of rest. Gonzalez held Oakland scoreless for five innings before running into trouble in the sixth. Errors led to a couple of unearned runs to go with the earned run Chi-Chi gave up. Keone Kela came in and closed out the fifth without further damage. The A's managed an additional run in the seventh but the bullpen was able to lock things down after that to hold them to a total of four runs.

Shin-Soo Choo led off the Rangers' scoring for the day with a solo home run in the bottom of the first. In the fourth inning Adrian Beltre, shown here on card AL-6 of the 2015 Topps set, hammered a two run shot into the Oakland bullpen to put the Rangers up 3-0. He returned to the plate in the fifth inning to launch a three run bomb into the Texas bullpen as part of a five run inning (Elvis Andrus had a two run single to bring in the other two runs). Rougned Odor finished off the home run parade with a three run dinger in the eighth inning. Final: Rangers - 12, A's - 4.

With the win, the Rangers kept pace with the Astros who have been thumping on the Angels the past couple of days. That leaves Texas 1.5 games out in the division race and still in control of the second wildcard slot. They are also just three games behind the Yankees for the first wildcard. Meanwhile, the Twins won't go away and remain just one game back of Texas in the wildcard hunt.

The Rangers home stand continues tonight in Arlington with the Astros coming to town for what is probably the biggest series ever played between the two clubs. If the Rangers can take three of the four games that will be enough to put them on top in the American League West. If they lose three of four they could find themselves on the outside looking in as the playoff fight continues. A split could maintain the status quo and that would only make the 'Stros happy.

Cole Hamels takes the bump for Texas tonight and it's time for him to bring the ace stuff. It's games like this that prompted Texas to trade for him and now's the time to prove the Rangers got a real ace. If Cole can keep the Houston offense quiet there's a real chance the Rangers could break out early. The Texas bats have been heating up lately and they may be able to continue that against Houston. It's showdown time in Arlington.
Posted by Spiff at 11:54 AM