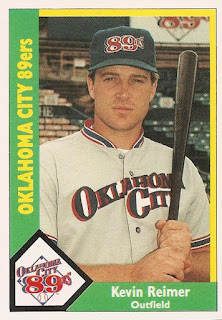 By the time Kevin Reimer appeared on card 169 of the 1990 CMC set, he already had some Major League experience. Starting at Single A after the Rangers drafted him in 1985, Reimer spent three seasons with three different Single A clubs before moving up to Double A Tulsa to start the 1988 season. He was a September call-up that year and appeared in 12 games for Texas. 1989 would find him in Triple A with the Oklahoma City 89ers. A cup of coffee in Arlington showed he was still on the radar with the big club.

Assigned to OKC to start the 1990 season, Reimer appeared in 51 games for the 89ers. Texas had Kevin in their system mainly for his bat, he appeared in the field for OKC in just 26 games. 19 of those games were at first base and seven in the outfield. While he managed to avoid any errors in the outfield, his .989 fielding percentage at first was pretty rough.

Reimer made 217 trips to the plate for OKC and put up a .283 batting average. He had a little trouble with the strikeout as indicated by his 25 whiffs compared to 18 walks. He did manage to flash some power though: 18 doubles, two triples, and four home runs. That's what the Rangers were really watching for.

Apparently the powers that be in Texas decided Kevin was ready. On June 2, 1990 the Rangers purchased his contract from the 89ers. He would stay with Texas for the rest of the 1990 season. During that time Reimer appeared in 64 games for the Rangers, mostly as a pinch-hitter. He did play five games each in left and right field and appeared as the designated hitter in 21 games. In left field Kevin managed to avoid any errors but things were much uglier in right, as shown by his .778 fielding percentage.

In his 111 plate appearances as a Ranger, Reimer posted a .260 batting average and a .333 on-base percentage. Not too terrible for his first prolonged exposure to Major League pitching. He still had a tendency to strike out - 22 times as opposed to ten walks. The power was still there though and that was good. Kevin picked up nine doubles, one triple, and two home runs while bumping in 15 RBI and scoring five times himself.

All in all, Kevin Reimer had a pretty good season in 1990. By showing that he could hit major League pitching, he put himself in a position to make the Big Club the next spring. If he did that, he could say goodbye to OKC for the foreseeable future.
Posted by Spiff at 11:49 AM