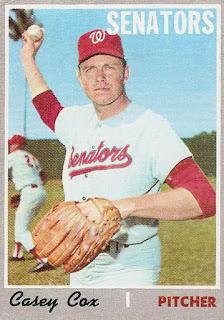 Joseph Casey Cox is sporting the red Senators look on card 281 of the 1970 Topps set. It's a look I don't particularly care for but it's what the team switched to in the late 60's.

1969 had seen the club move Cox from a full-time reliever role to a swing-man with more than a couple of starts. He responded with a pretty good season. That performance caught the Senators attention.

In 1970 the team decided to move Casey into the rotation on a permanent basis. He appeared in 37 games for Washington, with 30 of the appearances being starts. That was full-time in the rotation for Washington, nobody made all their trips to the mound in a starting role.

Cox tossed 192.1 innings over his 37 appearances. His watched his ERA jump to a rotation worst 4.45. His WHIP edged north as well to 1.326. Apparently Casey struggled a bit with his slider and sinker control as he walked 44 while striking out just 68. He ended the season with a 8-12 record.

1970 was a rough season for Casey Cox. The transition to full-time starter did not go as smoothly as the transition from full-time reliever to swing-man. Cox needed to regain control of his primary pitches and get the ERA and WHIP back down to at least the 1969 levels. If he could do that he might be able to stay in the rotation in 1970.
Posted by Spiff at 4:09 PM