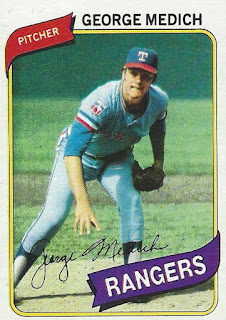 George "Doc" Medich, shown here on card 336 of the 1980 Topps set, was coming off a rough 1979 season and looking for a bounce-back. George was a big part of the Texas rotation plans and the Rangers were looking for him to bounce back as well.

Medich appeared in 34 games for the Rangers in 1980, 32 of those appearances were starts. That was the second most starts in the rotation, behind Jon Matlack. Doc tossed 204.1 innings (second highest on the team) and managed to lower his ERA a bit to 3.92. His WHIP crept up to 1.400 though. He struck out 91 opposing batsmen but also walked 56. He had better luck in his run support than Matlack and ended the season with a 14-11 record.

In spite of giving up a grand slam in the first inning of his first start, George Medich managed to put things back together in 1980. He was not an ace but was a very serviceable starter. The climbing WHIP was a matter for concern but it seemed very likely that Doc Medich would be back in the mix for the Rangers rotation in 1981.
Posted by Spiff at 11:50 AM