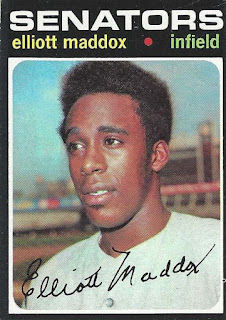 Elliott Maddox, shown here on card 11 of the 1971 Topps set, was a new arrival in Washington in 1971. The reason Maddox is hatless in this photo is because he moved from the Tigers to the Senators on October 9, 1970 as part of the ill-considered Denny McLain trade. 1971 would be Maddox's second season in the Majors. He had been in action for just 109 games with the Tigers in 1970.

Even though the front of Elliott's card classifies him as an infielder, he was primarily an outfielder for Washington in 1971. Serving mostly as a backup, Maddox still saw a decent amount of playing time. He appeared in 84 games in center field and played 485.2 innings there. His two errors put his fielding percentage at .989, above the league average .983. He was flawless in 40 innings over 12 games in left field and 76 innings over 10 games in right field. To round out his time in the field, Elliott also played 54.1 innings at third base, scattered over 12 games. He made one error there and his .947 fielding percentage was nine points below the league average.

Maddox made 312 trips to the plate during the season and put together a .217 batting average and .344 on-base percentage. He showed flashes of speed, stealing ten bases, but was also still learning the game, getting caught four times. Elliott had less than average power, hitting just eight doubles, two triples, and one home run. He scored 38 runs while knocking in only 18 RBI.

It's hard to tell if the sophomore slump hit Elliott Maddox in 1971. He hadn't had a super season in 1970 with Detroit so 1971 hadn't been a huge drop off. Defensively he had done well and proved his versatility in the field. One thing was for sure, if he wanted to secure himself a spot with the new Texas Rangers in 1972, he needed to up the offensive game.
Posted by Spiff at 10:30 AM