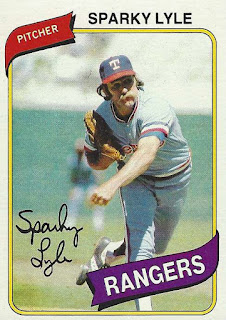 Jim Kern wasn't the only Rangers reliever to suffer through a rough 1980 season. Closer Sparky Lyle, shown here on card 115 of the 1980 Topps set, also struggled. Perhaps there was something in the water cooler in the Rangers bullpen. Perhaps both had been overworked in 1979. Whatever the cause, the Rangers bullpen was a serious weakness in 1980.

Lyle appeared in 49 games for Texas, all in relief of course. He finished 32 of those games but had a 3-2 record with just eight saves. Those poor totals were the result of an ugly 4.69 ERA and 1.550 WHIP. The slider was still occasionally working, Sparky struck out 43 opposing batters, but it was also not working at times, he walked 28.

By late June the Rangers were looking for a bullpen solution. They found at least part of one in youngster Danny Darwin. By the end of June Darwin had displaced Lyle in the closer role. Darwin would end the season with as many saves for Texas as Lyle had.

With Sparky struggling and Darwin apparently the answer to the closer issue, the Rangers appeared to have an extra piece in their bullpen. Philadelphia was on the way to a post-season berth and needed to bolster their bullpen. On September 30, 1980 the Rangers sent Lyle to the Phillies for a player to be named later. Texas received Kevin Saucier in return on November 19, 1980. As for Sparky, he found his groove in Philly and helped them to the playoffs. However, he was acquired too late in the season to be eligible for the post-season roster.
Posted by Spiff at 1:18 PM

The Phillies pulled some questionable hijinks to get rookie Marty Bystrom (who was 5-0 after his September call-up) eligible for the post-season. Veteran pitchers Randy Lerch and Nino Espinosa mysteriously came down with "injuries" at the end of the season, enabling the Phillies to use a loophole to get Bystrom (and someone else whose name escapes me now) on the post-season roster. The league must have drawn the line at Lyle however, since he was acquired in mid-September, and wasn't on the Phillies' 40-man roster prior to September 1st.

Lerch (a Phillie since 1977) was so pissed at his snub that he demanded (and received) a trade after the season.