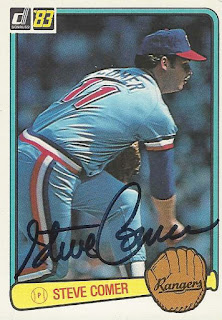 Well, the 2016 season keeps getting closer. Pitchers and catchers report on the 19th. Getting down to the final checkups for the players headed in. Jurickson Profar, Derek Holland, and Ryan Rua claim they are healthy and can't wait to get going. Adrian Beltre should also be ready to roll once camp starts. Josh Hamilton's knee is about ready but look for Texas to take things slowly with him to keep him from re-injuring it before it's completely back. Yu Darvish is reportedly on track coming back from Tommy John surgery but likely won't be making any starts until May.

The Rangers have also avoided arbitration with first baseman Mitch Moreland. The deal came just a few hours before the hearing was scheduled to begin. The agreement gives Moreland $5.7 million for the 2016 season. Mitch was the last Rangers player scheduled for arbitration. The deal with him means Texas has not had an arbitration hearing in 16 years.

Meanwhile, the 2016 Topps cards are out. I have yet to pick any up, mainly because I spent my card money on stamps and haven't yet got my stash built back up. Anyone else got any yet? If so, what are your thoughts on the new release?

Speaking of stamps, a few more through the mail autograph requests found their way home this past week. This signed 1983 Donruss card of former Rangers hurler Steve Comer was among the bunch. Returns also arrived from Johnny Grubb, Billy Sample, and Jerry Don Gleaton. Mr. Sample was nice enough to enclose a note wishing me good luck with my collection and blog. Thanks to all four of the players who were kind enough to sign and return cards to a fan.
Posted by Spiff at 9:30 AM