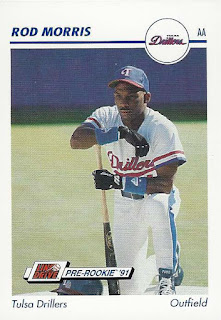 Coming off a decent 1990 season, Rod Morris was promoted from Single A Port Charlotte to Double A Tulsa for the 1991 season. Rod looks rather contemplative about the process on the front of card 588 in the 1991 Line Drive set.

Morris spent 102 of the 103 games he appeared in playing outfield. Not sure if he had a set spot out there or played all three positions for the Drillers. He made seven errors in the course of the season to put his fielding percentage at .966. That was eleven points lower than the previous season.

Rod made 420 trips to the plate for Tulsa. He put up a .269 batting average and a .321 on-base percentage. Surprisingly, that was 14 point increase in batting average and the on-base percentage was about the same as the previous season in A ball. Once again, Morris had more speed than power. He hit 17 doubles and eight triples but no home runs. He stole nine bases but also got caught six times. He scored 44 runs and picked up 35 RBI during the course of the season. Of concern were his 60 strikeouts as opposed to just 28 walks.

Rod Morris seemed to have made the transition from Single to Double A well in some respects. In others he still needed to catch up. His defense needed work and he was getting caught on the base paths more than he should. While his bat seemed to have stayed with him, he needed to find and correct the hole in his swing. Too many strikeouts could cause a problem for an outfielder with little power looking to move up the early 1990's Texas minor league ladder.
Posted by Spiff at 10:00 AM