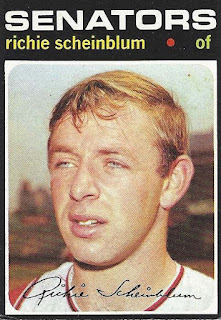 I must admit, I have no idea what is going on on 1971 Topps card 326. Outfielder Richie Scheinblum appears hatless in his Indians uniform on the front of the card. That makes some sense, the last time Scheinblum appeared in the Majors before coming to Washington was in 1969 with Cleveland. The part that doesn't make sense is the fact that Topps does a decent job airbrushing a curly W onto Richie's cap for the photo on the back of the card. Why put the worst possible picture on the front of the card?

Scheinblum was one of those players who always appear to be on the cusp of something big. What he needed was a full season as a starter. That was something that never happened with Cleveland. In 1969 he almost caught on but ended the season in the minors. He would spend the entire 1970 season in the minors with the Wichita Aeros of the American Association. A .337 batting average there caught the eye of the offense starved Senators. They purchased Scheinblum's contract on October 23, 1970.

The Senators brought Scheinblum into the 1971 season with high hopes and he started the season with them. Richie played in just 27 games for Washington in the early part of the season and made only 58 trips to the plate. Not a cold weather hitter, he put up a dismal .143 batting average and .263 on-base percentage. He showed he had a batting eye by working eight walks and only striking out five times. He had no power though, hitting just three doubles and no other extra base hits.

Not known for his fielding, Scheinblum played seven games each in left and right field for Washington. He tallied 46 innings in each outfield position and was flawless in left. He did muff two plays in right to drop his fielding percentage there down to .846 as opposed to the league average of .980.

With the outfield crowded and the team struggling, the Senators front office and seen all they needed to of Richie Scheinblum. He was sent down to Triple A Denver for the remainder of the season. Once he was back in the minors, Richie found his bat. In 455 plate appearances over 106 games he hammered out a .388 batting average and a .490 on-base percentage. The thin mountain air also helped his power as he knocked 31 doubles, 10 triples, and 25 home runs for the Bears.

While impressive, Scheinblum's Triple A performance was not enough to get him back to Washington. It was enough to get him another ticket to the Majors though. On October 21, 1971 the Senators sold Richie's contract to the Kansas City Royals. In 1972 KC would give Scheinblum the only starting job he ever held in the Majors. He responded with a .300 batting average, a .383 on-base percentage, and a trip to the All-Star game. It was his one season of glory. The Royals rewarded him by trading him to the Cincinnati Reds during the off-season.
Posted by Spiff at 10:00 AM