Kunkel in, Hamilton out. 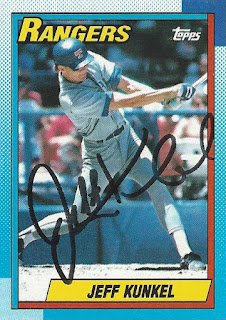 The autograph returns dwindled to almost nothing this past week. Jeff Kunkel saved the day when he signed and returned this 1990 Topps card and the 1991 Topps card I sent to him on January 23rd. Both cards arrived home last Friday. Only a few requests left out there from my last couple of batches of requests. Just sent out another batch yesterday though. Hopefully it won't be long until they start their returns.

It wasn't long for the Rangers to decide what to do with the ailing Josh Hamilton. Apparently they decided they won't be waiting for the second opinion on Monday. Looks like Josh will be starting the 2016 season on the Disabled List due to inflammation in his left knee. The club is hoping he'll be back by the first of May, if all goes well. It's the second season in a row Hamilton begins on the DL.

That leaves his spot in left field wide open and will spark a scramble for the job. Of course, as discussed yesterday, Texas has several in-house options. They are also still browsing the free agent market for possibilities. One name being bandied about is former Ranger David Murphy. He wants a Major League contract though and Texas is wanting to sign someone to a minor league deal. Understandable since the fill-in is only projected to play regularly until May. The difference could be a deal breaker. At least the pantry is well stocked at home so the Rangers have some options.
Posted by Spiff at 10:00 AM

Very nice. I need to send some out to former players. I got three from Tom Grieve today and sent to Steve Buechele at spring training.