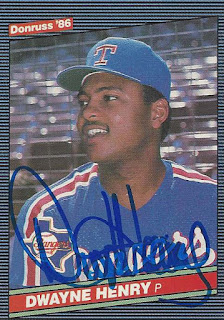 The Rangers are going. Yesterday was truck day at the Ballpark. The equipment is loaded on the truck and now on the way to Surprise, Arizona for Spring Training. Only two weeks until pitchers and catchers report. The 2016 season is creeping closer and I couldn't be more happy. It's been a long winter and I'm ready for some baseball.

While baseball teams are heading out for Spring Training, the through the mail autograph requests keep coming in. Over the last week several requests came back with successes. One such return was this 1986 card that Dwayne Henry was gracious enough to sign and return. It arrived in my mailbox yesterday after I sent it out on the January 23rd.

In addition to Mr. Henry, in the past week I received autographs from former Rangers Bobby Johnson, Bill Stein, Bob Lacey, Scott Fletcher, Mike Mason, Mike Smithson, and Jack Daugherty. It was a great week for autograph returns. Thanks to all these guys for the time they took to sign for a fan and drop the cards back in the mail.

I received another return that was pretty cool as well. I recently sent former Rangers outfielder Billy Sample an autograph request. I included a short note asking for an interview for this blog. I haven't received my cards back but I did get an email from Mr. Sample. He said he was willing to do the interview. I sent him some questions and he replied with some great answers. Should have the interview ready to post tomorrow. Be sure to check it out.
Posted by Spiff at 11:23 AM

Wow, the Rangers aren't taking any chances of being late. I mean, Pitchers and catchers don't report for another two weeks!