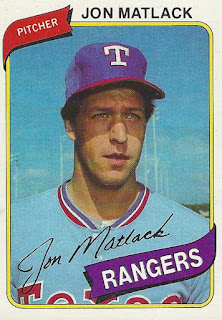 Jon Matlack, shown here on card 592 of the 1980 Topps set, was coming off an injury-plagued 1979 season that ended in surgery. The Rangers plan called for Jon to be brought back up to full action slowly since he just resumed throwing in November of 1979 after bone chips were removed from his left elbow. It was hoped that 1980 would be a bounce-back year. In fact, the Rangers made Matlack their Opening Day starter to kick off 1980.

Texas expected no more than seven innings out of Matlack per start in 1980. It didn't take him long to trash those expectations as he went 26.1 innings in his first three starts. He allowed just two earned runs during that stretch. All told, Jon ended up pitching into the ninth inning in ten of his starts. He also gained some attention for ending George Brett's 30-game hit streak on August 19th.

During the course season Matlack appeared in 35 games for Texas. 34 of those appearances were starts, the most of any Rangers pitcher. His 234.2 innings pitch also led the pitching staff. His 3.68 ERA was 45 points lower than the previous season and second only to Gaylord Perry in the starting rotation. Of concern was Jon's 1.334 WHIP, five points higher than the year before. Still, he was striking out far more batters than he walked. 142 whiffs for the season (a team best) as compared to 48 walks. In fact, he led the league in fewest walks allowed per nine innings. It was a measure of the run support Matlack received that he ended the season with a 10-10 record. One of those wins was a shutout.

All in all, the Rangers had to be pretty pleased with the season Jon Matlack turned in in 1980. It wasn't his spectacular 1978 season but, it was very serviceable. After being the workhorse of the Texas rotation, Matlack served notice that he was back from his elbow problems and ready to defend his starting spot.
Posted by Spiff at 3:25 PM