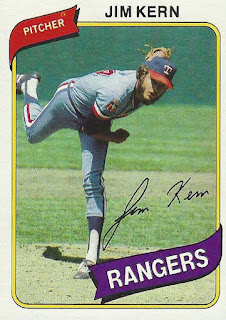 Jim Kern, shown here on card 369 of the 1980 Topps set, was coming off an amazing 1979 season. He was lights out that year coming out of the bullpen, made the All-Star team, and garnered some Cy Young and MVP consideration. The Rangers were looking for that to continue in 1980.

The season got off on the wrong foot as Kern injured his elbow pitching against Atlanta in Spring Training. That took the speed off his fast ball and the injury continued to plague him throughout the early part season. About the time the elbow seemed to be on the mend, Jim suffered a pinched nerve in his back in late July. On August 9th he was warming up on the sidelines. After delivering a warm-up toss, Kern looked up at a foul ball. The return throw from his bullpen catcher caught him in the mouth and knocked him off the mound. It took nine stitches to close up the wounds to Jim's mouth and the fall off the mound caused him to hit his head and suffer a concussion. That incident put him on the Disabled List until September 15th and ended his season.

In between injuries, Kern appeared in 38 games for Texas. One appearance was a start, with the rest being relief appearances out of the pen. In 63.1 innings Jim watched his ERA soar to 4.83 and his WHIP climb to 1.737. Obviously he was struggling with his control as he walked 45 while striking out just 40 opposing batters. He would end the season with just two saves, 27 fewer than the previous year.

To say 1980 was a disappointment for Jim Kern would be an understatement. It was a train wreck. Needless to say, the Rangers' expectations had not been met. Of course, injuries happen and the freak injury that ended Kern's season could not be accounted for. What was going to make or break Jim Kern was going to be his comeback in 1981. Would 1980 be the beginning of the end or only a dip in his career?
Posted by Spiff at 12:30 PM