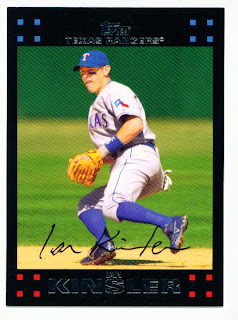 Well, I made it to a Rangers' game over the weekend and got back all in one piece. That is more that Ian Kinsler can say I suppose. Shown here on card number 81 of the 2007 Topps set, Kinsler left Sunday's game early. When he did, my father-in-law commented that Ian was not moving as fast as he normally does. I replied that I hoped he wasn't hurt. He is. Looks like a sports hernia. Looks like he may be gone for the rest of the season. Bummer.

Here are the answers to Wednesday's trivia:
1. True - I would have had to flip a coin on this one.
2. Dizzy Dean - might have gotten this one with a stab in the dark.
3. Bruce Sutter - missed by a mile.
4. Gary Templeton - ditto to number 4.
5. Babe Ruth - at least one I would have gotten easily.
Posted by Spiff at 4:09 PM