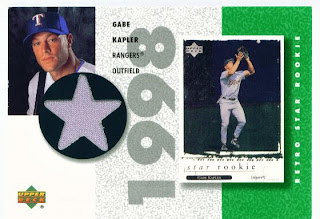 Today's card is number SR-GK from the 2002 Upper Deck Retro Star Rookies set. It features a game used jersey swatch of Gabe Kapler's. Yes, I know, another day late game-used post. I'll try and get back on track next week. Kapler is listed as a Texas Ranger and the Rangers logo is on the card. The swatch is from a Tigers uniform though, at least that's what the card says.

Texas lost last night to the Angels. Not surprising. What may be a new thing is that the starter only gave up two runs over six innings and was winning the game until the bullpen took over and blew it. Something wrong though about Brandon McCarthy still looking for his first win of the season.

If you look on The Bench you will see that they are running various card collection contests. These are face-offs of different collections and/or cards with the members voting on which ones they think should receive top honors. I am entered in a several categories but am really hoping to at least show in the Player Collector and Team Collector categories. If you get the time pop in and see how Spiff's entries are doing. If you're a member of the site I would appreciate your vote if you can give it honestly. At the least, you should find the contests entertaining.
Posted by Spiff at 7:40 PM