What ever happened to that guy? 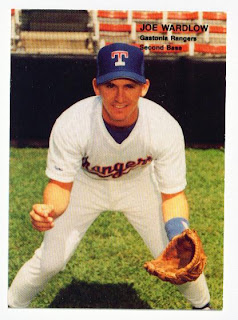 Today's card is a minor league card of Joe Wardlow. He played second base for the Gastonia Rangers and appears on card number 208 in the 1990 Best set.

Like many minor leaguers, Joe is a little bit of a mystery. I have several of Joe's minor league cards but he never shows up on Baseball-Reference.com so I have to assume that he never made the big show.

From what I can tell, Texas took Wardlow in the 20th round of the 1988 draft. In his first professional season at Butte he tore the cover off the ball, hitting .339 in 227 at-bats. He split the 1989 season between Gastonia and Charlotte with mixed results. In Charlotte he batted 156 times and posted a .314 average. He managed only a .111 average in 9 at-bats with Gastonia. After that he seems to drop off the face of the earth.

What happened with Joe? His bat appeared to be shaping up nicely. Was it his glove that gave him problems? Did he get hurt? Decide that professional baseball wasn't for him? Sometimes looking through old minor league cards gives one more questions than answers.
Posted by Spiff at 4:09 PM

Joe Wardlow played one more season for the Rangers and then one for the Yankess in Prince William and Albany. He was injured on the index finger of his throwing. He had surgery and did not fully recover, by the way, I know this because I am Joe Wardlow. I would like to know how to purchase so that my son will have one. Thank you.

Wow! I guess you never know who will drop by. Thanks for the comment and information Mr. Wardlow.

I checked and I have one extra of the card I posted. I also found a place that you can pick up most (if not all) of your cards for fairly cheap. Please e-mail me at rmatlack3 at juno dot com and I'll help you as much as I can. Thanks.

This is fantastic! I grew up watching the Prince William Yankees/Cannons. I remember watching Joe Wardlow! To know he visits fans' websites, it impresses me!