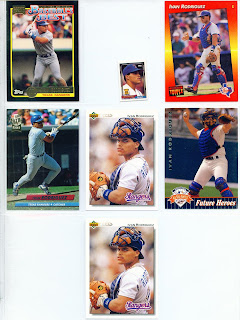 Hooray! It's Monday again! I know Monday isn't a big deal for most folks but it is my day off. Especially nice after working the weekend. Today the family and I are headed over to Kansas City to watch as Texas starts off a three game visit.

Got the two spots left for the 1992 Upper Deck FanFest Gold #2 and the 1992-00 Sports Illustrated for Kids #518. Give me a shout if you know the location of either of these cards.

Of these seven cards I like the 1992 Upper Deck the best. Nice shot of Pudge in the Tools of Ignorance. Since he made his name as much with his defense as his bat it is always nice to see shots of him in his gear.
Posted by Spiff at 10:33 AM