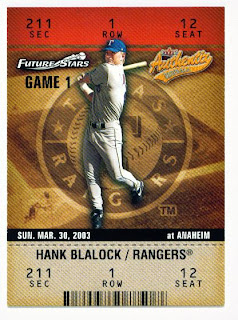 Blalock is moving back to first base. The Rangers announced this past weekend that they will be switching him and Chris Davis around. Apparently they have decided that Hank's shoulder just can't hold up at third. Davis did play some third base in the minors and so should be able to make the transition.

I thought at the time of the initial move to first that it would be a little less wear and tear on Blalock. I was hoping that the team would move Davis to third at that point. It didn't happen though until Blalock took another trip to the disabled list. Hopefully this time things will work out better than the first try.
Posted by Spiff at 6:59 PM