Another hurler bites the dust. 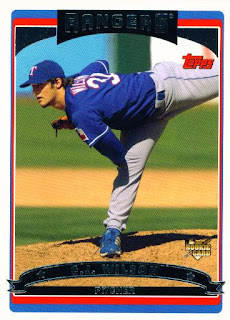 Today's card is number 321 in Topps' 2006 offering and features C.J. Wilson. As usual, the foil on the front of the card kind of melted into the background upon scanning.

I am not sure if I am relieved or sorry to see Wilson out for the last part of the season. He had obviously relished getting tabbed as the closer and finally seemed to be where he wanted to be in the pen. Unfortunately, he blew several saves and got shaky on a few others. On the last night he played he gave up a grand slam and then copped an attitude when manager Ron Washington came out to pull him.

Maybe Wilson just needs a rest. Perhaps the rest of the season off is a good idea. Maybe it will help him come back rested and ready for next year. I hope so. The Rangers seem primed to go as far as their lineup and just need some pitching to go with it.
Posted by Spiff at 5:21 PM