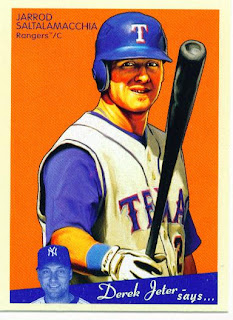 The Rangers made history last night. No, not just because it was their first three game sweep of the season. For the first time ever the Rangers swept the Royals in Kansas City. Who would have guessed that in 36 years they hadn't managed one single sweep at Kaufman?

The last two games of the series were pitchers duels. Both nights the Rangers managed to win on runs scored as a result of Royal errors. That means being awake and taking advantage of the situation. Jarrod Saltalamacchia, seen here on card number 183 of the 2008 Goudey set, was awake when Royals pitcher Brian Bannister dropped what appeared to be an easy popup. Salty was running on contact with two outs. When the ball hit the ground he just kept moving and managed to score from second.

Nice to see heads up play. Also nice to see the third quality outing in a row for a Rangers starter. The only thing that bugs me is that it is August and the ship is sunk. Why can't the guys play this way in April and make August mean something? Still though, at least they aren't just coasting into the end of the season and that is commendable.
Posted by Spiff at 11:42 AM