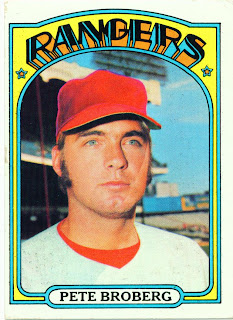 Not much to report on the Rangers front today. The club is still playing footsie with Ben Sheets. Ryan and Daniels had dinner with him and seemed to get along swimmingly. Of course, the team hasn't made him an offer yet and he hasn't passed a physical so it may all come to naught.

Thought we would go back to 1972 and take a look at another in the Rangers' first team set. Today's card features pitcher Pete Broberg and is number 64 in the 1972 Topps set. There are a couple of things that are interesting about this card.

First, we can't see up Pete's nose. That is significant after seeing the odd angle of the pictures from the previous four cards in this set. I don't know how Pete, a rookie of all things, managed to avoid the awkward fate of his teammates. Perhaps his photo was taken early enough that the team move had not yet been finalized and so the photographer didn't know to avoid the Washington logo. More likely it was the sideburns. Gotta get those bad boys in the picture.

The second thing that catches my eye is the red. Note Pete's red hat and red undershirt. Note also the Senator's consistent cellar dweller status. That is the true red uniform legacy folks! The Washington Senators wore red, the Texas Rangers switched to blue and should have stayed with it. Sorry, still not over the red is back announcement.
Posted by Spiff at 4:08 PM

Not a bad looking card though, except for the lack of a logo on the cap. It's hard to believe that Topps went all of those years without logos.