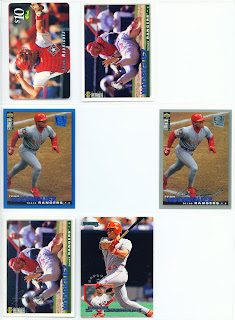 Wow! Derek Lowe turns down the Mets and it looks like Milton Bradley may soon be a Cub. With only about 40 days left until pitchers and catchers report it looks like things might finally be moving a little. Ok, let's take a look at what we have today for one of the still unsigned catchers out there.

Had a dentist appointment today and stopped by Wal-Mart afterwords. Picked up a blaster of 2008 Upper Deck Documentary just to check them out. While I have my gripes with the set I am intrigued by the idea and have decided to try to nail the Rangers set. Should be kind of fun. Almost all the rest that I got are for trade.

Got home from the dentist and opened the mail. There was a nice box of Rangers from Cliff over at Capewood's Collections. Awhile back he and I had agreed on a team lot trade and the 300 card box of Rangers was in exchange for a similar box of Phillies and Astros. Haven't had time yet to really look through the box but it looks like I will be able to fill several holes in the collection. Thanks Cliff! Let me know if you ever want to repeat.

The second package I received was the result of winning a year-end give away on The Bench. Bench member MrMopar is a great guy who loves his odd-ball stuff. He had to thin things out a bit though and thus the giveaway. I got a bubble mailer full of odd-ball Rangers. Minis, stamps, over-size cards, even a few cards written almost completely in French! Way cool. If you haven't gotten on The Bench yet, you really need to get there. Tell 'em Spiff sent ya.
Posted by Spiff at 6:08 PM

I bought a bunch of singles off of ebay of Padres, I was going to try and build the Padres set. But this stuff sucks, pictures don't have anything to do with the captions, pictures are duplicated, no i.d. of the player on the front. I do believe I am done with this stuff.

Yeah, I have the same gripes. Upper Deck should have taken the time and used pictures from each game rather than short cutting it.