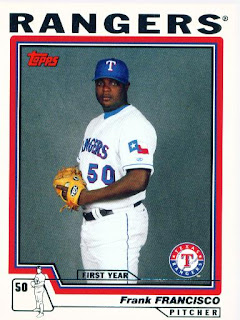 The Rangers have managed to avoid arbitration with both C.J. Wilson and Frank Francisco. This leaves Marlon Byrd as the only Texas player left who is arbitration eligible.

It may also set up an interesting Spring Training showdown. Francisco, shown here on 2004 Topps Traded card number T111, was the Rangers closer at the end of last season and is well positioned to stay there. C.J. Wilson started off last season as the closer before an injury shut him down. He is interested in getting back into the role.

From what I have seen thus far, I prefer that Frank repeat. My reasoning is simple really. Francisco had far fewer problems closing games than Wilson did, even when healthy. Also, Wilson is a lefty and could be more versatile as a middle reliever who could be brought in to choke off a rally and set up for Francisco.

Interestingly enough, someone foresaw Francisco as the closer. On the back of this card he is referred to as being "pegged as a future closer by Texas." C.J. may have his work cut out for him to regain his closer title.
Posted by Spiff at 5:07 PM