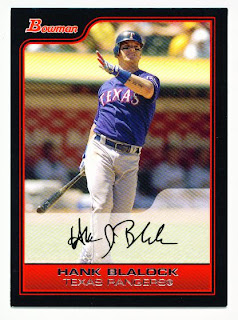 Got a nice surprise in the mail this morning in the form of a package from John at The Pursuit of 80's(ness). John is a great guy and will occasionally send cards for no other reason than he wants to give them to someone who would appreciate them. Well, I sure appreciate this group.

John sent 38 cards and I needed eleven of them. Not bad at all for what he just happened to have laying around. Included in the lot was this 2006 Bowman Hank Blalock, number 74 in the set. This card is particularly appreciated since it completes my team set from that year and brand. Now I just need to try and come up with something to send John in return. Thanks for the cards and completing my team set John, you are truly a class act.

Jon Daniels is now saying that he thinks Michael Young will be with the team at the start of the 2009 season. I sure hope he is right. Losing Young now would be like taking a torpedo in the boiler room of the SS Playoff Hopes. Not a good situation. Elvis Andrus may be ready to play shortstop at the major league level (though I have my doubts) but he can't provide the leadership and mentoring that Young can.
Posted by Spiff at 10:24 AM